The Queen of Woolloomooloo 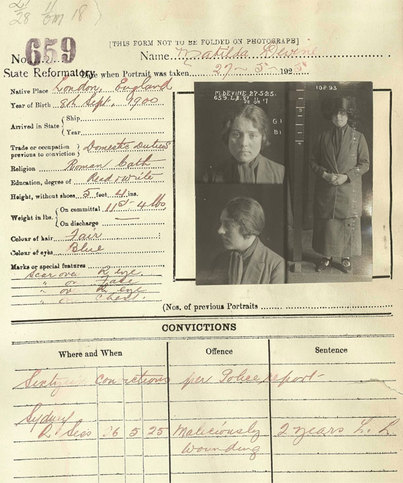 The Razor gangs were led by two very different women. One of these women was Tilly Devine or also known as the Queen of Woolloomooloo. She ran a number of brothels centred around Darlinghurst and the Cross during the 1920s and 1930s in Sydney.

Matilda Twiss was born in Camberwell, London in 1900 and began working as a prostitute after she left school. She then met James Edward Devine or also known as ‘Big Jim’ whilst he was serving as an Australian Digger during World War I. He provide protection for Tilly when she was a prostitute and was a small time crook. In 1919 Tilly and her husband left for Sydney. Her husband then went on to selling cocaine in Tilly’s brothels

By 1925 Tilly had become well-known to the police and had a string of offences. Tilly served two years in the State Reformatory, Long Bay for maliciously wounding Sydney Corke with a razor blade. When she was released from prison she made some important career changes. She started her own brothels and was able to have a long career as a madam because the law was that is was illegal for only men to earn money from prostitutes. Tilly quickly set up a number of brothels around Sydney.

Tilly Devine also had a personal rivalry with Kate Leigh which lasted many years. Kate Leigh ran the other most powerful razor gang. She ran a business which provide illegal alcohol after 6pm. Both of these women were powerful, rich, violent and always wanted to out do each other.

In January 1930 the Vagrancy Act 1929 was introduced. This gave the police new powers to arrest and jail anyone founded to be consorting with thieves, prostitutes and vagrants. This new act caused Tilly to get arrested.

During the 1930s the effects of depression and the new Vagrancy Act put pressure on Tilly and her business. In 1954 Kate Leigh declared bankruptcy and then died in 1964. By 11959 Till was forced to sell off her large and extensive property holding in order to pay off $20 000 to the tax office.

Tilly Devine died of cancer, aged 70, on the 24th of November 1970. Her death went unnoticed by the media and her funeral service was poorly attended.
Powered by