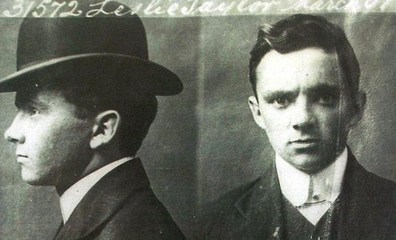 Joseph “Squizzy” Taylor was born on 29 June 1888 and was a Melbourne based career criminal and gangster who died violently on 27 October 1927 at just aged 39. Over the last 20 years Squizzy Taylor has appeared repeatedly on the news due to suspicions, formal accusations, and some convictions related to a 1919 violent gang war. He also participated in a robbery where a bank manager was murdered in 1923. He was known for a variety of names, some include Squizzy Taylor, Leslie Grout, Michael McGee, David Donoghue. He was known as a criminal mastermind due to the cleverness he interpreted into his crimes. Due to a left eye squint, his nickname was Squizzy.

This professional criminal has been caught for a variety of different crimes. These range from pickpocketing, assault, robbery and murder. He received the majority of his income from grog selling, illegal bookmaking, demanding money, prostitution and later in his life, cocaine dealing.

One example of Squizzy proving his sly reputation is when he wrote letters to the media whilst in hiding from the police for 14 months. In some cases he took the credit for other people's violent crimes to make himself appear to be a more threatening and dangerous criminal.

One interesting fact about Squizzy Taylor is that a television series called Underbelly was loosely based on Squizzy’s life.

Squizzy Taylor was fatally wounded in a gunfight with a rival John Daniel Cutmore, at house in Carlton. He later died at St Vincent's Hospital, Fitzroy, on 27 October 1927. The gangster who shot Squizzy, Daniel Cutmore, also wounded a standover man associated with the Razor Gang and was also wounded.

One well known crime that Squizzy has committed was in 1913 Arthur Trotter, a commercial traveller was murdered in front of his wife and five year old son by Squizzy Taylor. Disputes between rivals resulted in the Fitzroy vendetta of 1919 in which several men were shot. Taylor was among the principal figures in this gangland shooting.

Ruling Melbourne’s underworld in the 1920s, Squizzy has been described as a mix of psychopath and Australia’s Robin Hood.