Queen of the Underworld 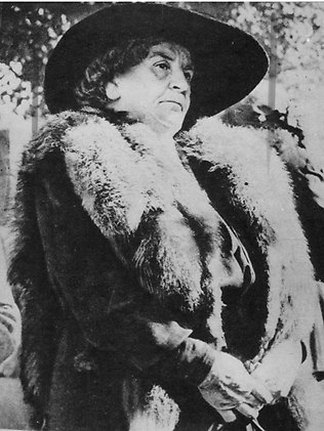 The other leader of the razor gang in Sydney, was Kate Leigh. She ran a sly-grog business in Surry Hills, which provided alcohol after 6pm when the pubs had to shut. She also became known as the ‘Queen of the Underworld’ by also dealing cocaine and running illegal gambling.

Kathleen (Kate) Leigh was born on the 10th of March 1881 at Dubbo in New South Wales. When she turned 18, she moved to Sydney and soon got into trouble. She married James Leigh in May of 1902, who was a known illegal bookmaker and petty criminal. He was imprisoned for assault and robbery and Kate was also convicted but it was overturned on appeal. They marriage soon broke apart and they divorced in 1921.

Leigh formed a relationships with many people like Samuel Freeman, which widened her contacts with the criminal underworld. From her Surry Hills home, she became an organised crime entrepreneur. She provide a wide range of illicit goods and services, for example after-hours drinking venues, sly-grog, illegal gambling and betting and she also became a cocaine dealer. Because of this she became known as the ‘Queen of the Underworld’ and gained the trust and loyalty of a wide male network of gangsters.

Kate Leigh kept her business going during the depression by also processing stolen goods for resale. During the 1930s and 1940s, there was frequent police raids and minor convictions but Leigh kept her sly-grog business going and became very wealthy. She was often seen wearing silver fox furs, large brimmed hats and many diamond rings.

Leigh also was in a violent feud with her rival Tilly Devine. This last about 20 years and on many occasions they physically fought each other and their gangs also conducted battles.

Kate leigh was one of Sydney’s richest women during the 1930s and 1940s. But in the early 1950s she was sent into bankruptcy by the taxation department for unpaid taxes and fines. The New South Wales government then changed the law so the the pubs and hotels would be able to sell alcohol until 10pm which then killed the sly-grog business and put her out of business.

Leigh was then living in virtual poverty and suffered a severe stroke in late January. She was rushed to hospital and then died in early February. She was buried in Botany Cemetery, now known as Eastern Suburbs Memorial Park
Powered by